Trending
You are at:Home»Personal Stories»The Trauma Of War And What Comes After: A Fighter Pilot On Finding Purpose And Inner Peace
By Jerry Yellin on February 1, 2015 Personal Stories

December 7, 1941. The radio blared, “Pearl Harbor attacked by the Japanese!” I was in the store beneath my apartment in Newark, NJ. Like many who were listening, I wondered where Pearl Harbor was and what had prompted such a malicious act. I knew then that I would join the military on my 18th birthday, February 15, 1942, become a fighter pilot, and fly against my enemy.

I entered service in August 1942 and graduated from flying school in August of 1943, with ten hours of flying time in a P-40.

Next, I joined the 78th Fighter Squadron in Hawaii for further training. We flew P-40s, P-47s, and then P-51s. The last week of December 1944, we flew our planes to Ford Island in Pearl Harbor, and watched as they were loaded onto an aircraft carrier. We spent sixteen days at sea before arriving in Guam in January 1945.

“These many benefits—inner peace, contentment, and freedom from anger and blame—seem to come to all who learn TM.”On March 7, we flew to the Island of Iwo Jima, eight square miles of land where ninety thousand soldiers were fighting: sixty-seven thousand Americans against twenty-three thousand Japanese defenders. The smell of death, the sound of warfare, and the sights remain with me to this day. We strafed for the Marines for thirty days until the island was secure.

On April 7, 1945, along with fifteen other members of the 78th, I flew the first long-range, eight-hour escort mission of B-29s over mainland Japan. I watched from above as bombers dropped firebombs on Tokyo. Little fires became big fires, and square miles of the city burned. Not once did I think there were people on the ground. They were Japanese, my enemy, not people!

I flew a total of nineteen missions over Japan, on either escort or strafing missions on airfields, sea shipping bases, trains, and military installations. I flew with sixteen young men who did not come home. While flying the very last combat mission over Japan on August 14, 1945, the day the war ended, my wingman Phil Schlamberg was killed. He was the last man killed in combat in WWII. 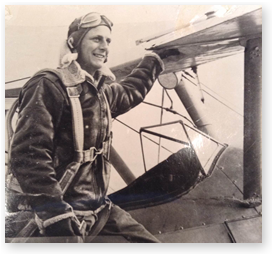 Then I came home and had to face reality. Almost every night in my dreams I saw the faces of my squadron mates who had been killed. I couldn’t hold a job, nor did I have any desire to live. I thought about suicide a lot.

I met my wife, Helene, on Good Friday in 1949. We were married on October 22. I could not hold a job, and we moved more than a dozen times. I stopped working altogether and made a living gambling on the golf course. I had a wonderful wife and was the father of four wonderful sons, but I couldn’t enjoy them. I was unhappy with life itself until the summer of 1975.

In June of that year, Maharishi Mahesh Yogi appeared on the Merv Griffith show. Helene saw the program and decided that she wanted to learn Transcendental Meditation. She started in July, and I learned in August. This was 30 years after I had been at war.

My life took on meaning and purpose within the first month of doing TM twice a day, every day. I stopped seeing my dead comrades every night in my dreams, and my sleep deepened. I became an expert in real estate financing and consulted with major West Coast banks. More importantly, I went to Japan on business in 1983 and for the first time, saw Japan and her people as human beings rather than the faceless enemy.

Our youngest son, Robert, graduated from college in 1984 and took a job teaching English in Japan for one year. Now it’s 2014 and Robert has not returned yet. He married the daughter of a Japanese fighter pilot in 1988, and they have two sons and a daughter.

I can say without a doubt that if I had not been doing TM, the Japanese, my enemy, would never have become a part of my life. My anger for my enemy turned into love for my family because of the benefits I received from TM.

These many benefits—inner peace, contentment, and freedom from anger and blame—seem to come to all who learn TM. I know it made me a better husband, a better father, and a better person, without me ever thinking about those traits and characteristics. Without trying. It happened as a natural result of my mind diving deep within and my body dissolving deep-rooted stresses.

As a recovered PTSD veteran, I feel that Transcendental Meditation should be offered to all veterans. To reach this goal, I helped found Operation Warrior Wellness with the David Lynch Foundation in 2010 and TM For Veterans in 2014. 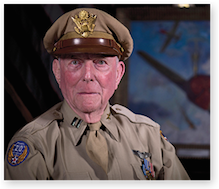 Today, at age 90, I continue to promote TM for the veterans of Iraq and Afghanistan. When I speak to these veterans, I speak from my own experience. I tell them that this meditation not only has brought me peace and contentment, it literally saved my life.