Trending
You are at:Home»Personal Stories»My First Experience With Transcendental Meditation, Pt. III: Crawling From The Chasm Of Doubt And Into The Calming Pool Of TM
By Brian Baker on June 13, 2014 Personal Stories

What if the opposite of truth wasn’t a lie, you just didn’t know the truth to begin with?

This is how I came to understand my life before TM. The fact that I’ve improved my life, relationships and writing through TM isn’t the big thing, it’s discovering the lie we’re told as kids. 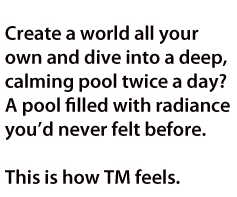 The lie says this: We have to follow the things those before us did. We must have the family, job and spiritual life of our parents. At least that’s what I believed growing up.

In truth, we’ve always been in control, but the things we didn’t know about who we were are great enough [that]they were overwhelming and thus creating a chasm of doubt you’ll struggle to climb out of your entire life, not to mention the loss of creativity due to trying to climb from the chasm.

Each day we wake up and decide what to do with our life.

What if you could get past the lie and create a world all your own and dive into a deep, calming pool twice a day? A pool filled with radiance you’d never felt before.

This is how TM (Transcendental Meditation) feels.

I wake up an hour earlier than I did before TM, I go to bed earlier and I have more energy than I did in my teens.

One of the biggest, and most obvious to those who know me, is the feeling of your mind being at rest all day. There are hiccups, but for the most part nothing bothers me.

I go through my day job with such energy people have asked what I’m taking. None of them know what’s going on, and I like it that way. I like to keep them guessing.

My creativity is higher than it’s ever been. I can recall my dreams, and nightmares, with clarity; something I’ve never been able to do before.

Writing is no longer as difficult as it once was, the editing side still is. The first draft comes faster, I get in a rhythm earlier and I hit “The Zone” earlier than I have with anything I’ve written before.

Honestly, there are a million ways to describe TM, but until you try it, you’ll never understand.

On his blog, Brian writes, “I’m a Writer, dad, Transcendental Meditation practitioner and I have a day job on the Vegas Strip.” If you have any questions or comments for Brian, you can leave them on his original blog post here.

My First Experience with TM: Diving to the Source